The State guarantees that successful RESS projects will have their electricity output presold, at fixed prices, for upwards of fifteen years.  Therefore, the economic viability of the projects can be validated, de-risked and made bankable ever before construction takes place.  Communities now have an opportunity to lead in the decarbonisation of our society and economy.

Templederry Community Windfarm in Tipperary is operating since 2012 and it is Irelands FIRST and ONLY community owned energy generation project.  Community Power, a Templederry trading name, sells electricity to homes and industries across Ireland.

Community Power is assisting urban & rural communities throughout Ireland to become involved in the RESS program.  The first RESS program (RESS-1) commenced in 2020 and we are delighted that Community Power has been successful in assisting Claremorris Energy Coop in Mayo and Dunmore Energy Community in Galway  to get through the auction.  These two communities will commence building their solar parks in 2023 and transmitting power to the national grid in 2023/24, with revenue flowing back into the communities also. In 2022, during the RESS2 auction, two more 100% community owned projects were awarded and they  will be located in Mayo and Tipperary.

Applications for the next RESS programs (RESS-3 &) has begun.  We are assisting many communities around Ireland with RESS-3 & 4 and it is hoped the construction and the revenue streams of the solar parks will start in 2023.

We serve the common good, as such we believe communities should seek to enable & empower each other in a socially responsible and sustainable way.  Assisting communities to successfully navigate the RESS program, and process, enables us to deliver on our mandate.  We envision ownership, control and revenues residing (100%) with the communities. 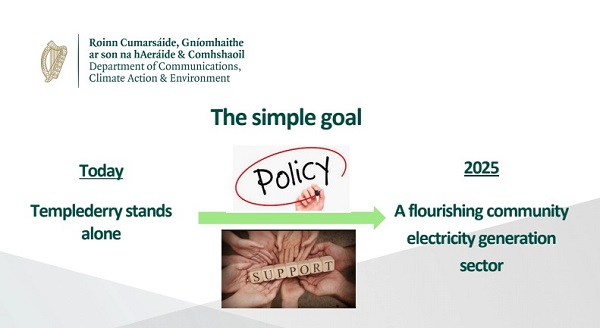 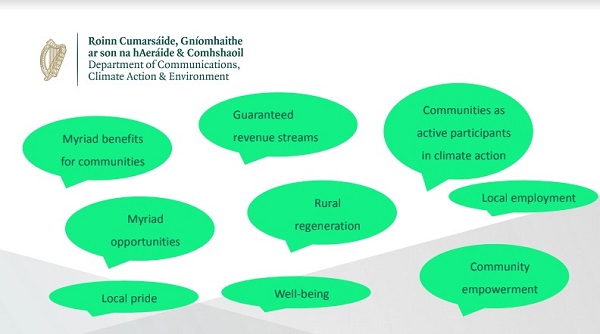 The RESS program is administered by the Department of Communications, Climate Action & Environment (DCCAE) https://www.dccae.gov.ie/en-ie/energy/topics/Renewable-Energy/electricity/renewable-electricity-supports/ress/Pages/default.aspx

Below are two extracts from the DCCAE – RESS community roadshow, in January 2020.