Community Power is a member of the Community Power Coalition which brings together a diverse network of like-minded organisations who share a common goal of promoting the development of citizen and community ownership of energy in the urgent transformation towards a 100% renewable energy system. The Coalition includes associations representing energy cooperatives, networks of cities and local authorities, the renewable energy industry, legal experts and diverse environmental NGOs.

Europe’s current energy system, which is dominated by a small number of large utilities, accounts for over 30% of Europe’s overall greenhouse gas emissions. In order to address global challenges such as climate change and socio-economic inequities, Europe’s future energy system must be sustainable, carbon-free, socially fair, publicly owned and controlled by local communities and people.

We believe that a decentralised and 100% renewable energy system is both possible and necessary – while our energy demand must decrease. We demand an end to the control over our energy systems by a handful of large utilities, and we demand that EU citizens are put at the heart of our energy transformation.

The potential for people – individually and through their community, public entities and small enterprises – to actively engage in the energy transition is significant. By 2050, at least half of EU citizens could be producing their own renewable electricity, meeting at least 45% of the EU’s electricity demand.

The Community Power Coalition believes in locally and publicly owned energy projects aimed to address local socio-economic needs, based on voluntary and open membership, democratic control, each member’s economic participation, and fair and equitable benefit sharing. Community ownership empowers citizens to make decisions about their energy future. Community ownership of renewable energy production maintains benefits from renewables locally by creating jobs, boosting local investment, providing services such as education, encouraging citizens to save energy, and fighting against energy poverty. By driving public acceptance of renewables, energy communities can bring people together to benefit both their societies and the energy system. The potential of energy communities lies not only with production and distribution of renewable energy but also encourages energy savings.

Market-based approaches alone are insufficient to drive a successful energy transition. Renewable energy sources are common goods, and all citizens must have a fair opportunity to take ownership and benefit from participating in the energy transition. Furthermore, the energy transition must be based on fairness and solidarity, where no one is left behind, including vulnerable and energy poor households.

The Community Power Coalition demands a full and timely transposition of the EU Clean energy package through:

Click on the image below or the following link to read the full vision statement: Community Power Coalition Vision Statement 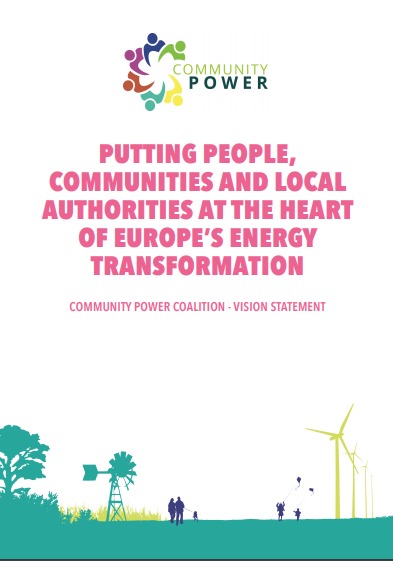