The results of the first Renewable Electricity Support Scheme Auction (RESS 1) were announced today, granting support for 82 wind and solar projects (including 7 community led projects).  This support scheme will see a further 2,200 GWh of renewable electricity generated in Ireland.

Among the winners includes two solar parks with Community Power in Counties Mayo and Galway.

This scheme marks a turning point for the people’s ownership of renewable energy in Ireland.  It is the first time community led projects have been given priority access to the energy market and also sets a welcome precedent for communities across Europe, as approval from the Director General of Competition at the European Commission was required to ensure the scheme was compliant with the strict State Aid Rules.

Speaking from the launch JP Prendergast from the Claremorris and Western District Energy Co-operative said:

“Our co-operative will be building a solar park here in Claremorris, which will generate enough power for our town. We’ve already helped to get solar panels for our local school, and retrofitted a number of buildings, but the solar farm is going to be a game changer for generating income and supporting local jobs here in Claremorris. From this one project we will have the opportunity to seed many many more through our co-operative.

We will be selling our power through Community Power, Ireland’s first community owned energy supplier, who have supported us every step of the way”

(click here to Switch your electricity supply to Community Power) 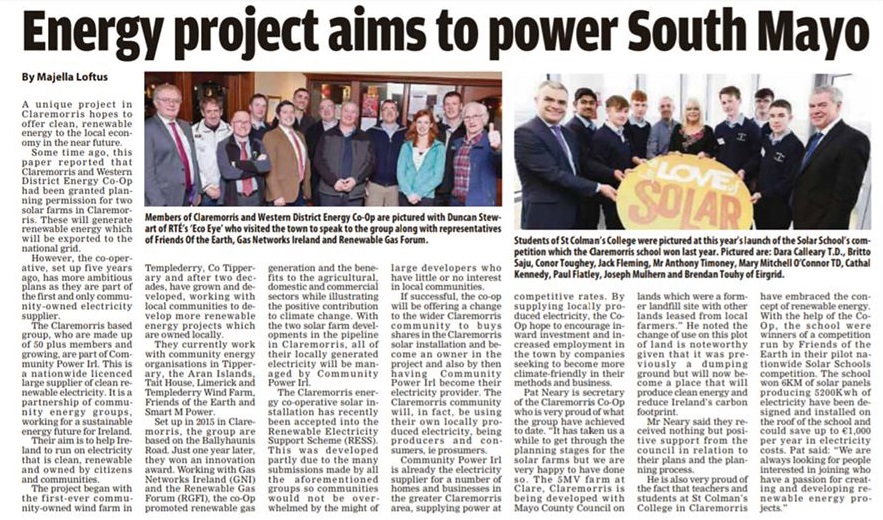 Citizen and community owned energy is Ireland is rare, however the message from the European Commission is that diversity of ownership in energy is an important part of a fair and fast energy transition.  The Clean Energy Package includes a number of Directives which grant new rights to citizens and communities to generate, sell, store and share renewable energy. This auction is the first step at making this more commonplace in Ireland.

‘When we built Ireland’s first community owned wind farm in Templederry we were excited to to be the first.  But we never wanted to hold the tile of being the only one for so long!

We have been working for the last 5 years to support other community energy groups around Ireland to get to a point where they could lead their own projects. To see eight community projects awarded today shows there is real potential in our communities to come together and do this.  I am confident for the next auction there will be many more.”

“It is our vision that every citizen and every community in Ireland can have the opportunity to really be active participants in this energy transition.  For us that means inspiring people to build their own renewable project, whether in a farm or on a roof, and then buying and selling that clean power to and from themselves.

Of course renewable energy displaces fossil fuels from the energy system so that is a huge benefit, but there are so many other benefits too.  There are lots of owners so the economic benefits are shared widely, local jobs are created and tend to stay local, and communities can start to count on an alternative income stream.’

With Community Power we have built a virtual power plant to allow buying and selling of power from community to customer. It’s an exciting time.

In addition to the support for the community led projects, further community funds are provided fro in this scheme through a mandatory Community Benefit Fund which will be set at €2 per MWhr and will be available to all residents within a certain proximity of new renewable energy developments.

(click here to Switch your electricity supply to Community Power) 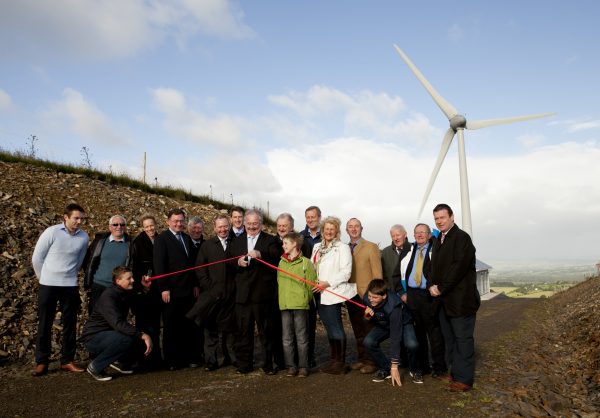 The official opening of Templederry Wind Farm in 2012