The Climate Action Plan is the Government’s plan to give Irish people a cleaner, safer and more sustainable future. A key part of the Plan is a move to 70% renewable electricity by 2030.

“Radically reducing our reliance on fossil fuel is central to responding to the climate emergency. This Scheme is a crucial enabler as we decarbonise our electricity grid and move to clean, renewable energy. Round one will deliver an expected 30% increase in renewables – that is the equivalent of powering up to 640,000 homes every day.

“Today we are publishing the terms and conditions of the Scheme to give more clarity ahead of the Scheme formally opening for applications in March. The community participation element is crucial. We must ensure local communities are involved in projects in their area if we are to deliver on the scale up that is required.”

The Renewable Electricity Support Scheme (RESS) is an auction-based scheme which invites renewable electricity projects to bid for capacity and receive a guaranteed price for the electricity they generate.

The Government has already agreed the proposed elements of the Scheme which, subject to state aid approval, will make up the first auction set to open later this year:

The Department held a public consultation on the draft Terms and Conditions in December 2019. On the basis of considerable feedback from over 100 stakeholder responses, a number of amendments were made to the final version now being published. The Terms and Conditions include a comprehensive description of the auction framework, terms of the support and bidder eligibility criteria.

RESS-1 will provide a pathway for community projects through the community preference category and a mandatory Community Benefit Fund for all projects successful in the auction.  Together, these aspects of the scheme provide a major boost to communities in contributing to Ireland’s renewable energy and climate goals.  The community preference category in the RESS 1 auction is an innovative and ground-breaking measure to provide greater financial support to communities investing in renewable projects. This delivers a powerful signal that supports and enables community investment.

Another community participation element of the Scheme, citizen investment opportunities, will be included in a future round of the Scheme. It has not been possible in the time available to design an investment model which would be workable and in order not to delay this auction, this aspect will be examined in the context of the next RESS auction.

The Department remains committed to this concept as set out in the RESS and will continue to investigate opportunities to delivering on these investment opportunities in future RESS auctions.

Further information and the full Terms and Conditions of the first Renewable Electricity Support Scheme are available on the RESS page of the Department’s website. 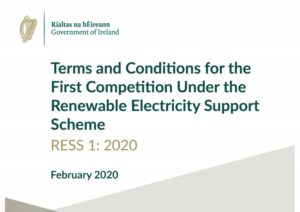 The frequency of future RESS auctions is dependent on the renewable electricity project supply pipeline. It is envisaged that a minimum of four auctions will occur between 2020 and 2027 to deliver on the 2030 targets. This will provide pathways for renewable developers including offshore wind projects as it sets out the indicative timelines and volumes for auctions over the coming decade and provides clarity for developers in relation to when they need to have their projects ‘auction ready’.  It will also allow Ireland to take advantage of new technologies as they emerge.​